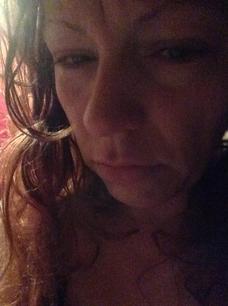 From 500+ seizures per month

In the 30 years she's suffered with the condition, the official diagnosis is "Photosensitive Epilepsy (w/ Generalized Clonic Tonic Seizures);

"One is a photo of myself at 5:30 am, waking up from nocturnal seizures and

depression and PTSD, leading me down the path of contemplating suicide,

feeling helpless, hopeless and being a constant burden to friends and family.

can state without a doubt that the Cannabis extracts are literally saving my life."

At age nine, Donna was playing hide-and-seek at church one Sunday morning and was found having a seizure while hiding. As far back as she can remember, she has had daily seizure activity, upwards of 20 or more when no medication was available.

"My epilepsy is considered intractable, meaning Western medicine doesn't have an effect on the seizure activity. Prior to using Cannabis, I was prescribed a number of medications over the years, none of it helped to decrease the number of daily seizures; increasing the frequency and intensity instead of any therapeutic benefit whatsoever and the side-effects were very unpleasant. Everything from weight gain, allergic reactions, sleepiness, severe depression, postictal psychosis to failed suicide attempts. I had no other choice to ditch the big pharma medications and give cannabis a try." 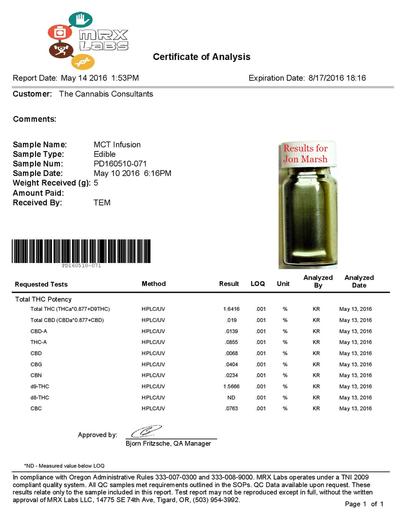 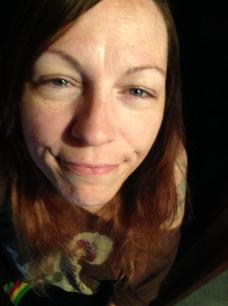 Donna began using approximately 12 drops of Cannabis-infused coconut oil when she felt the onset of seizure activity. This prevented any seizures from occurring, as long as she was able to take the medicine within minutes. The three seizures Donna had in the first two months of this method were due to her inability to access the medicine.

After​​ two months, Donna went to a set schedule of taking 6 drops four times each day: upon waking, around noon, around 4 PM and once before bed. By keeping the Cannabis in her system, she didn't have any pre-seizure auras or other activity and she slept better than she had in years.

​After three weeks of using Cannabis four times a day, Donna switched to taking one gel capsule, approximately 0.1 grams of concentrated Cannabis extract, just before bed. On the first night, she went 23.5 hours before feeling the need for more, so she adjusted and added a few drops of the coconut oil infusion around 10 PM and that protocol seems to carry her through to the next once-a-day Cannabis gel capsule she takes before bed each night.

Donna was on the following medications with no benefits whatsoever

The Cannabis extracts that have worked to curb Donna's seizures have all been primarily THC with very minimal amounts of CBD. The Cannabis concentrate is mixed with coconut oil and heated to create an infusion, typically dispensed from a dropper bottle so more accurate dosing can be administered.

Cannabis extract gel capsules were also implemented and Donna can take one at night and not have any pre-seizure activity for the duration of the 24 hours between capsules, although she does administer a tincture or use a vaporizer at points throughout the day. ​ 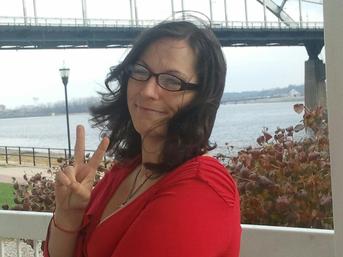 543 mgs of cannabinoids per ounce

Donna, a 39 year old woman from Indiana, has had 500+ seizures per week since she was nine

years old. After moving to Oregon in 2015 and trying Cannabis extracts, Donna's found a new outlook on life and is now virtually seizure-free.

"After witnessing me have and assisting me during the numerous severe Epileptic seizures on a daily occurrence, a loved one and I packed up all that could fit in a car, leaving Indiana and its obtrusive laws. Ending up in Portland Oregon, we struggled living in the car and eventually traded in for an RV eventually settling on the coastal area. My friend then contacted a Cannabis consultant for me, after reading an article online about a local Cannabis activist; someone who had apparent success treating a few patients of seizures. So we set up an appointment and from the first time I took the Cannabis extract, my life changed for the better..."